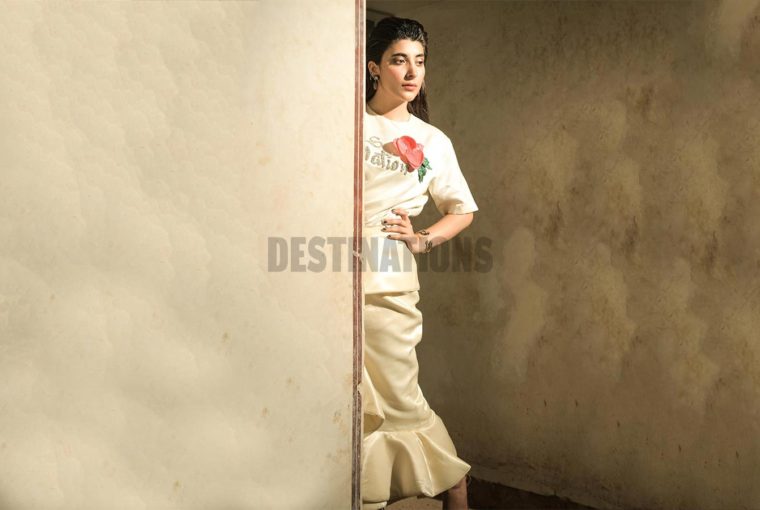 With a hugely successful drama serial in 2016, Udaari, and two big-budgeted films slated for release this coming Eid, Urwa Hocane seems to be in a cosy place as far as stardom is concerned. Hailing from the infamously sleepy capital city, she talks about her journey to the media world and becoming famous, her soulmate Mawra, the love of her life, Farhan and how her omnipresence on social media brings her great energy and positive vibes.

In the past four years, she seems to have hit bull’s eye every time and has managed to chart a career trajectory that has led to much fame and applause. On a personal level too she has conquered love and married the man of her dreams. Next month’s blockbuster, Punjab Nahi Jaungi, will be released simultaneously with Na Maloom Afraad 2; a sequel to her original 2014 blockbuster. With these two big films lined up for Eid ul Azha and another one scheduled for later this year, Urwa Hocane has got to be the fastest rising star on the media circuit in Pakistan. She seems to have made all the right decisions and bagged all the right projects.

So how does a doe-eyed beauty from the infamously sleepy capital city manage to steal the limelight and become so famous, I ask before I encounter the smug response. “It’s not a sleepy town; just a peaceful one. I absolutely love it. I mean, I grew up there and that is where I launched my acting career.” Really? In Islamabad? The incredulity was sincere as the home of the state is not best known for being home of the stars. “To be honest, I never really planned on becoming an actress. It all started when I tried to audition for a theatre play that was happening in Islamabad but failed it. Not wanting to leave the sets, I persevered and took on a role in the backstage production team to see how it is done. And then in the next play, I not only cleared the audition but won the lead role – Mary Poppins.”

In her usual happy-go-lucky lilt, she goes on to explain how she was ‘discovered’ by someone in the TV world during the play and landed her first electronic gig as a VJ. “It was an exciting time. I used to go to college in the morning and record the show in the evening,” that is until Urwa got called to Karachi for ARY Musik and since then, there has been no looking back.

While most millennials are struggling with entry-level employment or navigating their way to find the right job, at 26, Urwa Hocane has not only skyrocketed out of obscurity but has sealed her fate as an industry staple now. “Life is good when you do what you love. Acting makes me happy. For a scatterbrain like me, it is also a form of meditation. When I am acting, I am not thinking about anything else. I am totally immersed in that moment and all my energies are focused towards the job at hand.”

For Urwa, the jarring juxtapositions between real and reel is softened by the fact that she is surrounded by two people who are not only her family and her best friends but also people who understand the inherently bizarre pressures of being a media personality. “I am a homebody. I relax when I lounge around in my PJs, spending downtime with my sister, Mawra, or my husband, Farhan køb viagra.”

A music artist and an actor. It’s a coupling that is universal in its appeal and occurrence. Having met Farhan at a mutual friend’s get-together about four years ago, the two instantly clicked and before long were inseparable. After a refreshingly unhidden romance, he announced their engagement on Instagram in a Murad Osmann-esque #FollowMeTo photo against the iconic backdrop of the Eiffel Tower, Paris. A rock star in his own right, Farhan, the former lead vocalist of the music band, Jal now performs solo and is also pursuing a career in acting. “Farhan and I talk about anything and everything. He is also my best critic. He advises me, motivates me and gives me strength to be the best in my field.”

With a strong support system, Urwa manages to keep it real. She is also very close to her sibling, Mawra. The friendship between the two sisters, two years apart in age and both actresses, presumably vying for similar roles transcends the ugly stereotypes of an industry notorious for pitting females against one another. “See, it doesn’t work like that. Above anything else, Mawra is my soulmate. She and I are very different in terms of our personalities, how we dress up or emote. But once in a while if something does come along that suits both and one of us bags it, the other cheers on. One way or another, the project is coming home!”

It was the widely acclaimed TV drama series from 2016, Udaari, that confirmed Urwa’s coming of age as an actress. A double-barrelled success that enjoyed critical applause and audience popularity, with key social messages at the heart of it, incidentally it was also the one that saw her sharing the screen with her husband, Farhan. However, much of her fame can also be attributed to the ever-growing power of social media. In an undeniably new celebrity frontier – one marked by a relentless pursuit of stars in the age of omnipresent phone cameras – Urwa has managed to keep her fans well engaged. She has 1.5 million fans on Instagram and three hundred and thirty four thousand followers on Twitter.

“It all happened because of Mawra. She convinced me to set up my social media pages and advised me to stay connected to my fans. And now this rolling snowball has become so big that my entire wedding was shared on Facebook and Instagram – the event went viral. Times have changed. Every person has a cell phone with a camera. Obviously we couldn’t stop our guests from using their phones so we decided we would let people shoot videos or take photos as they please. As a result, I see my wedding from different vantage points. It’s actually a lot of fun!”

Imbibing the culture of clicks and likes, she seems to have mastered a fine balance between deliberate sharing and unabashed over-sharing; sifting fans from followers. Little wonder then that her relationship remained rock solid throughout and she manages to ward off any unnecessary pressure on her marriage. “I share a post when I want to, not because I have to. And I don’t mind being open about my life. If I can inspire other people to own each other, it’s great. This world only needs love.” True. With a punchline like that, she certainly knows how to create headlines for after all is said and done, Urwa Hocane has the star power to do so.

Who was Hakim Ilmuddin Ansari?