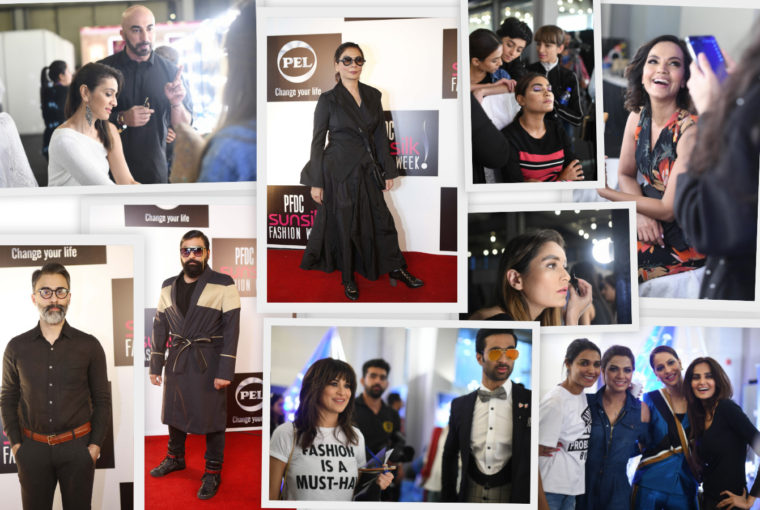 Popular fashion blogger and critic, Aamir Bukhari of Aamiriat, reviews PSFW 2018. Not one to mince his words, he does so with signature brutal honesty and without any qualms for being “politically correct”. 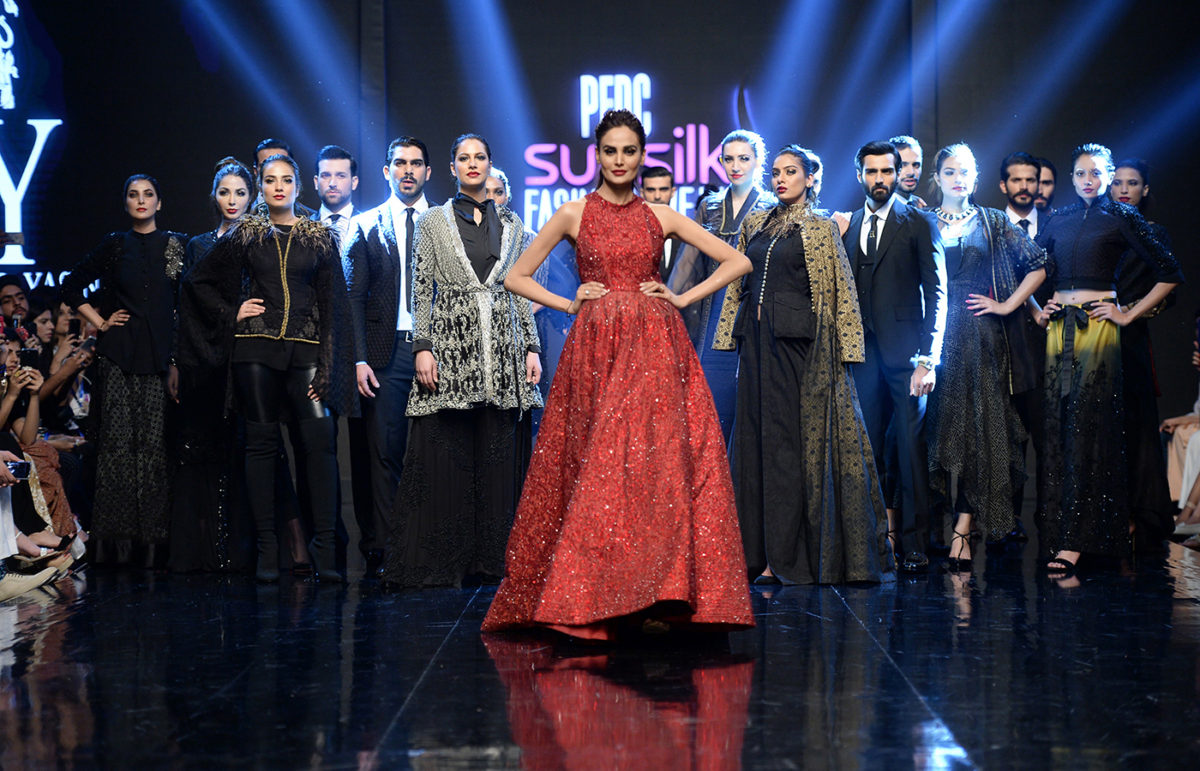 Every March, I get the privilege of covering PFDC Sunsilk Fashion Week. I call it a ‘privilege’ because other than my brutally honest critique and the ability to spot copycats, which I’ve been doing for more than 6 years now, I consider myself of little value to brands. I don’t do red carpets, let alone praise them with poetry and creating artistic imagery for them.

This year, to my great surprise, the red carpet was missing the two usual suspects – luminaries from the fashion industry and celebrity glamour. Although celebrity presence at front rows and as showstoppers in runway shows may garner extra attention for designers, I have always felt they also take away the seriousness of the craft/clothing itself. Many a soul gets caught up in the glitterati as designers bring out their celebrity siblings, spouses and friends to make up for the lack of technical expertise in clothing itself.

As for the notable fashion houses not showing, many are now hosting individual shows for spring/summer. The big designers aren’t shy to loosen their purse strings to stage a presentation of their own as it clearly gives them more control over things.

Coming back to PSFW, a welcome change we saw since last year is the presence of two separate runways speeding up the transitions but then it also meant there was no captive audience for lesser-known designers. I could easily choose to skip by going out to the hall, as many chose to do for the high-street  segments *cough banal textile shows*. Not to sound snobbish but year after year, garment manufacturers and textile mill owners have shown under the guise of “high-street”; I ask how many more swaying indistinguishable floral prints and shalwar kameezes will it take for them to realize that fashion will never truly embrace them with seriousness and ‘the masses’ who actually buy their clothes have nothing to do with shoddy dresses made out of lawn dupattas. I genuinely feel that the high-street showers desperately needs a ‘style manifesto.’

There were some commendable strides in showcasing and developing relevance for local craftsmanship with appliance manufacturer PEL helping to stage a craftshow featuring 4 designers: Akif Mahmood, Hamza Bokhari, Shahroz Tariq and Zonia Anwaar along with jewellery by GOLD By Reama Malik. In terms of clothes, I say great effort with a genuine heartfelt motivation but I, along with most people sitting with me in the press section, were of the opinion that if the show was done with textile mill owners to bring the designs to the market on a certain scale, it would have made a bigger impact. Otherwise it is just fanciful applause for 4 individual designers with little consequence.

A Note On The Menswear

PSFW 2018 was encouraging for menswear, for I finally started seeing options other than stuffy valima suits and bridal sherwanis. With Hamza Bokhari’s four distinct looks, I loved the urban spin on local crafts and how it felt easy and wearable. Having said that, when the models for the design house Republic by Omar Farooq started to walk out, I could hear bloggers and designers let out a collective ‘oooh’. His Japanese-influenced Manga collection tapped into today’s obsession of reinventing high-end Savile Row suiting for the sidewalk sneaker-heads with roomier pants, slouchy silhouettes and athleisure elements like Virgil Abloh’s Off White. At Fahad Hussayn too, I picked up on the more youthful take on suits featuring elements similar to those of kimono wraps and ties on pants. Not sure how an average Joe could pay for them but I will surely be getting my hands on one of the pieces. I say it with conviction that if designers today don’t tap into the younger generation, which remains fixated on Snapchat and labels like Supreme, then they risk becoming irrelevant. 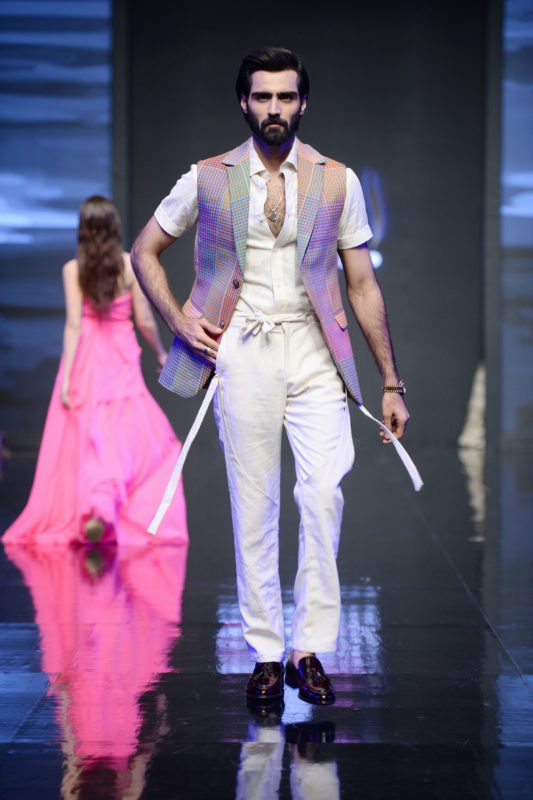 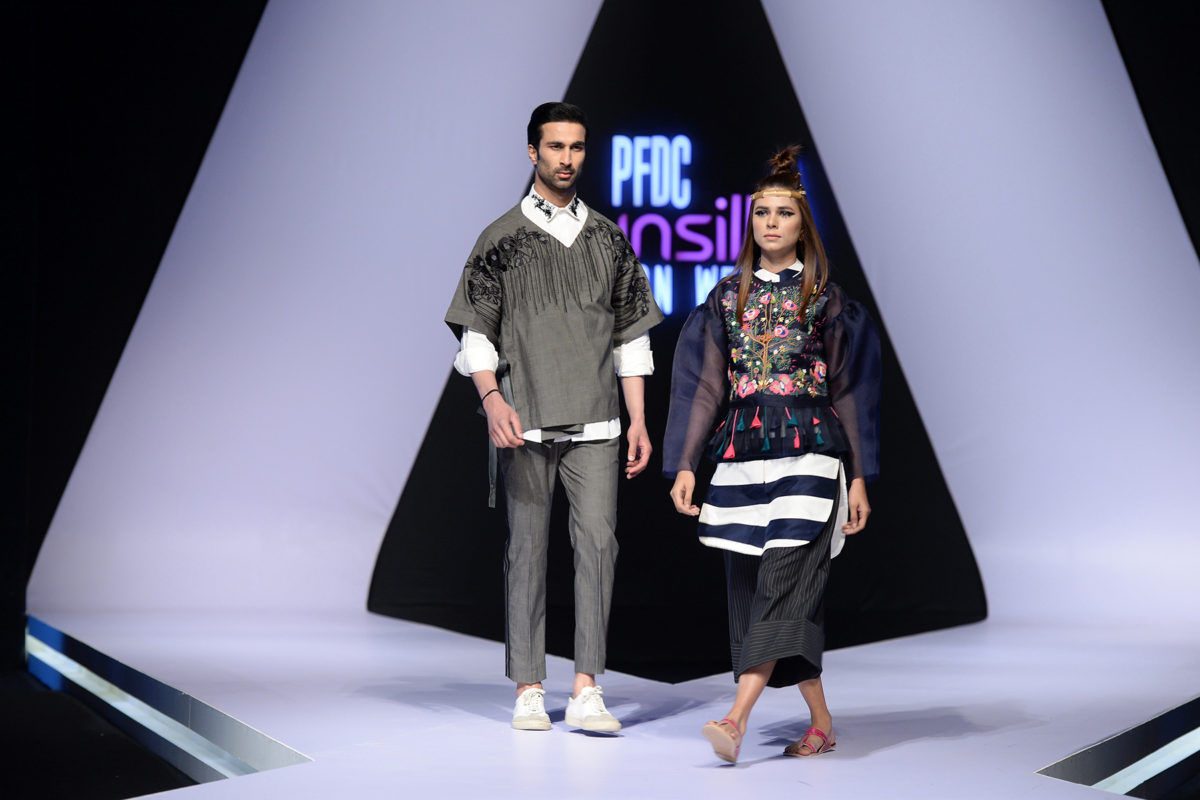 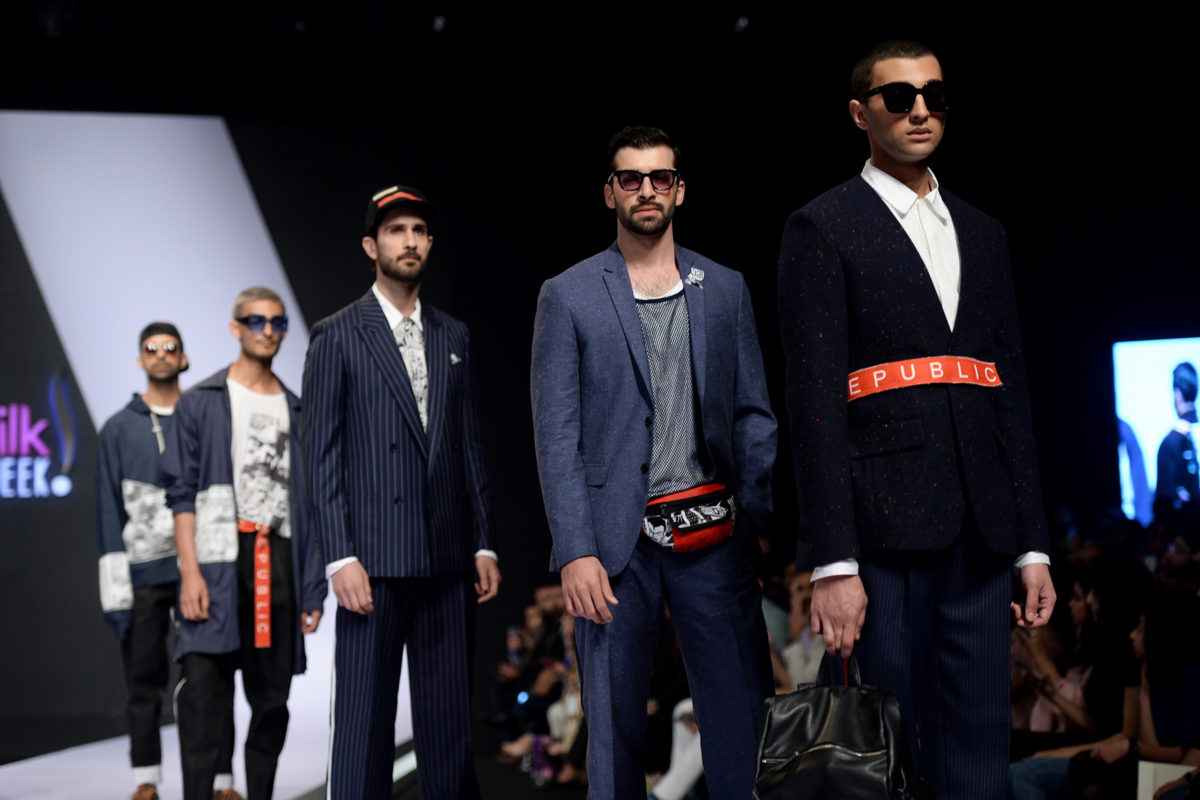 A Nod To Feminism

There were also nods to the feminist cause. Firstly by young designer Hira Ali whose ‘Woman is Future’ slogan and use of sheer seemed to tick off all trends checklist. Many of my blogger friends called her show a reductive version Maria Grazia’s SS 2017 Dior. I favoured the youthful no-fuss image her clothes evoke with typographic print and the use of wispy feathers, but where she will go with this in terms of retail remains to be seen.

HSY, being his usual “showman” self, pulled many rabbits out of the hat: with celebrities chanting ‘Be Your Own Knight’ to generate PR buzz; foot-tapping chartbusters from Tina Turner, Diana Ross and Madonna got everyone in the groove so much so that even my stone-faced self started singing along. However, the clothes left much to be desired, a print journalist sitting next to me mumbled, ‘Some of the pieces seem recycled – as they have just been over dyed black,’ and now that I look back it probably was true. Besides the patch pockets on Cybil’s long jacket and the bedazzled arm of Waleed’s suit, the clothes didn’t match the high energy of the music. Thankfully the models from yesteryear like Abdullah Ejaz, Rachel, Cybil and finally Mehreen, in a dramatic red gown as showstopper, saved the day.

With both the shows perhaps the question is how much would the Pakistani fashion consumer read into the feminist slogan? NOT MUCH, I would say.

Then there were Sania Maskatiya and Zonia Anwaar. Maskatiya’s Colour Dash through the use of print and contemporary cuts made a compelling case for uncomplicated femininity. I love how big bold black and white stripes were worked into something so absolutely flattering. I wish more women would embrace cuts like these instead of RTW sacks that are sold in the name of fashion. The younger Zonia Anwaar was no less impressive with her use of Ikat print in colours like mikado yellow, autumnal amber, and bright pink. I particularly liked how it was accessorized with gold jewellery and nifty belts. With a little more finesse in terms of construction, she too can become one of the notable designers who offer modern and practical womenswear. The numerous options for women to conceal and show and make it work with both designers were remarkable. 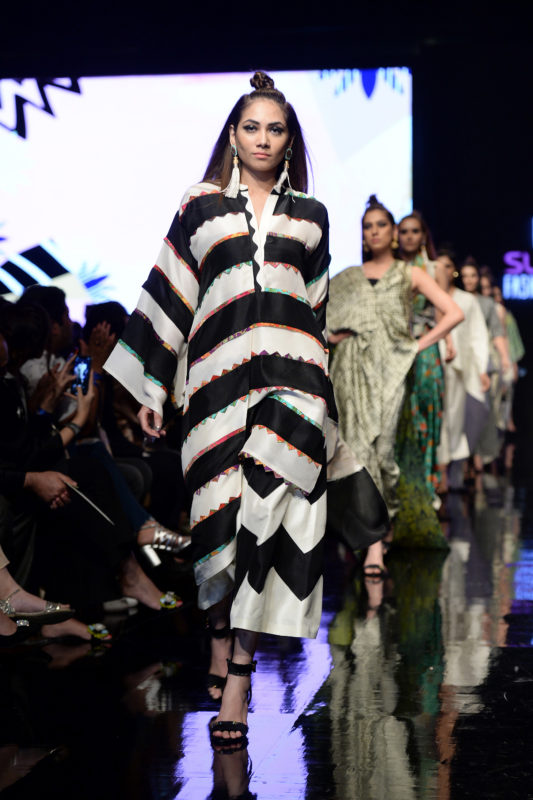 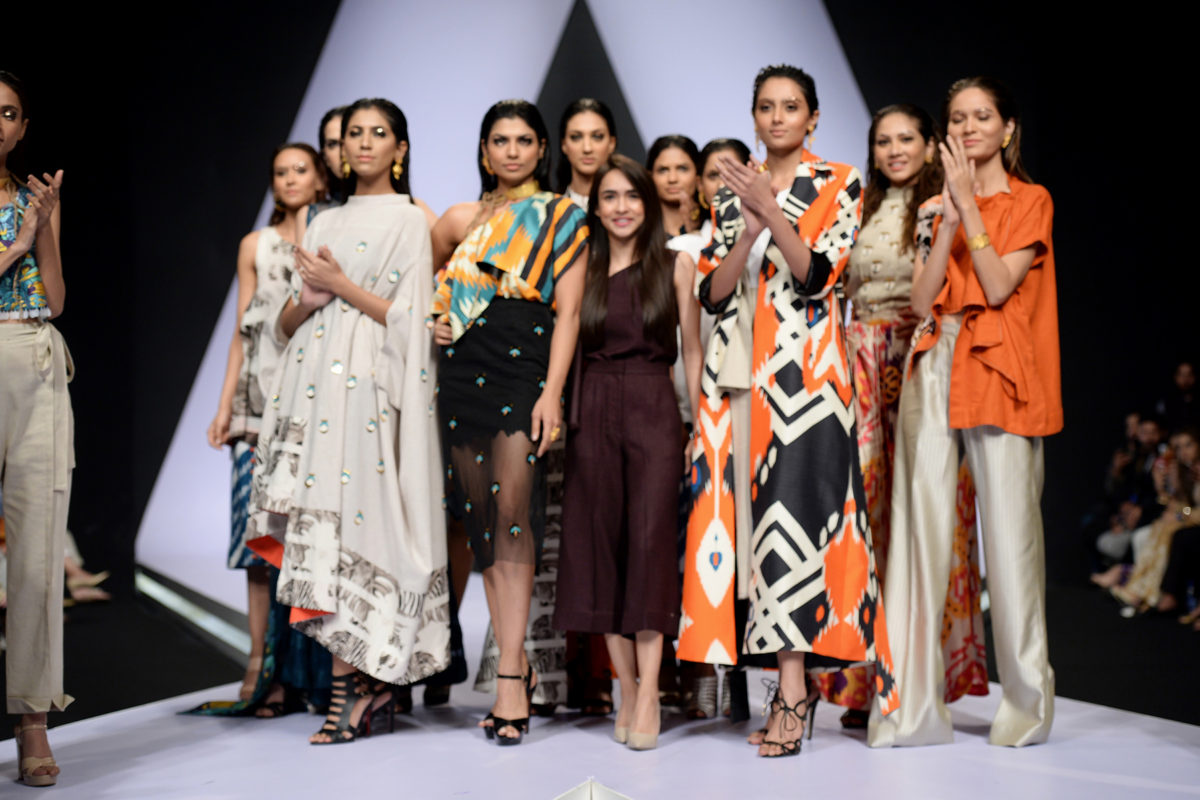 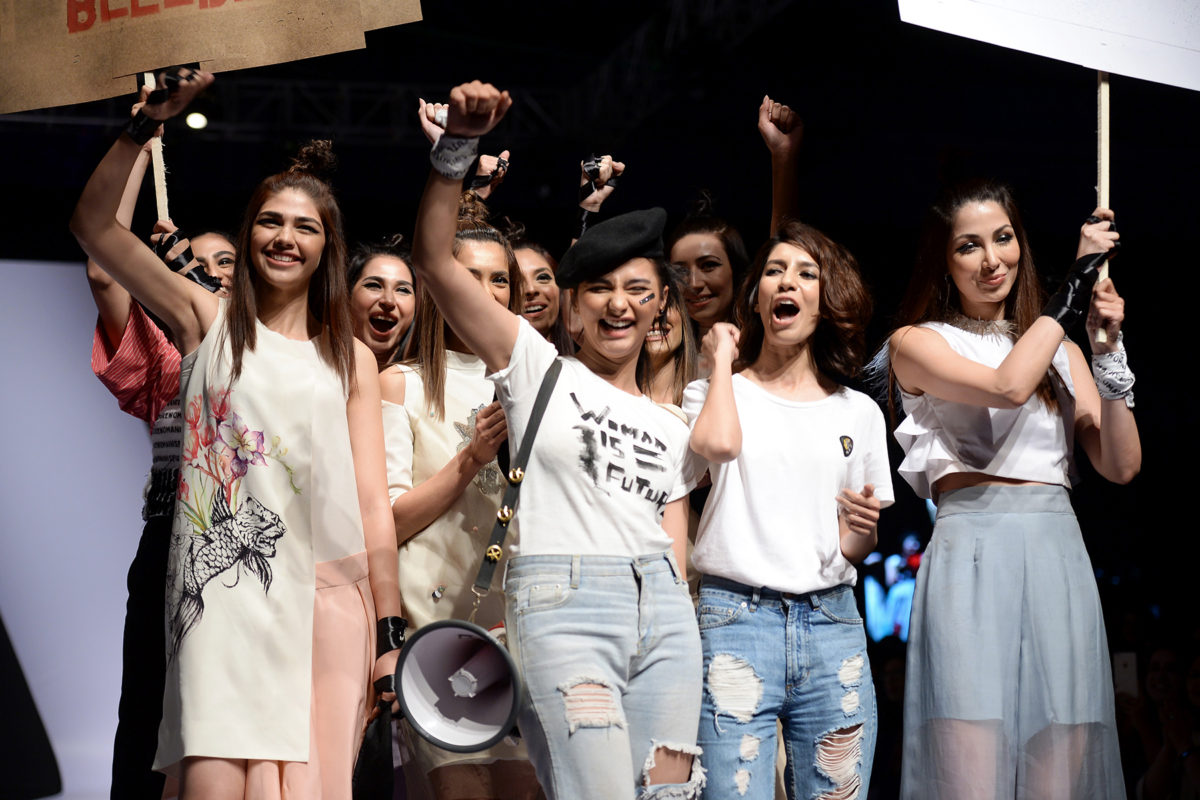 A Salute To Cultural Heritage

And then there were nods to our own rich cultural heritage with designer Nida Azwer who chose to expand on elements from Mughal art and architecture, with meticulously layered ensembles featuring motifs of miniature paintings over generous lehengas fashioned like western skirts and heirloom-worthy shawls wrapped like beautiful frescos on the walls. I as a guy may not get to wear any of the beautifully crafted pieces, but the shawls were tempting enough for me to beg, borrow or steal for (proverbially speaking). 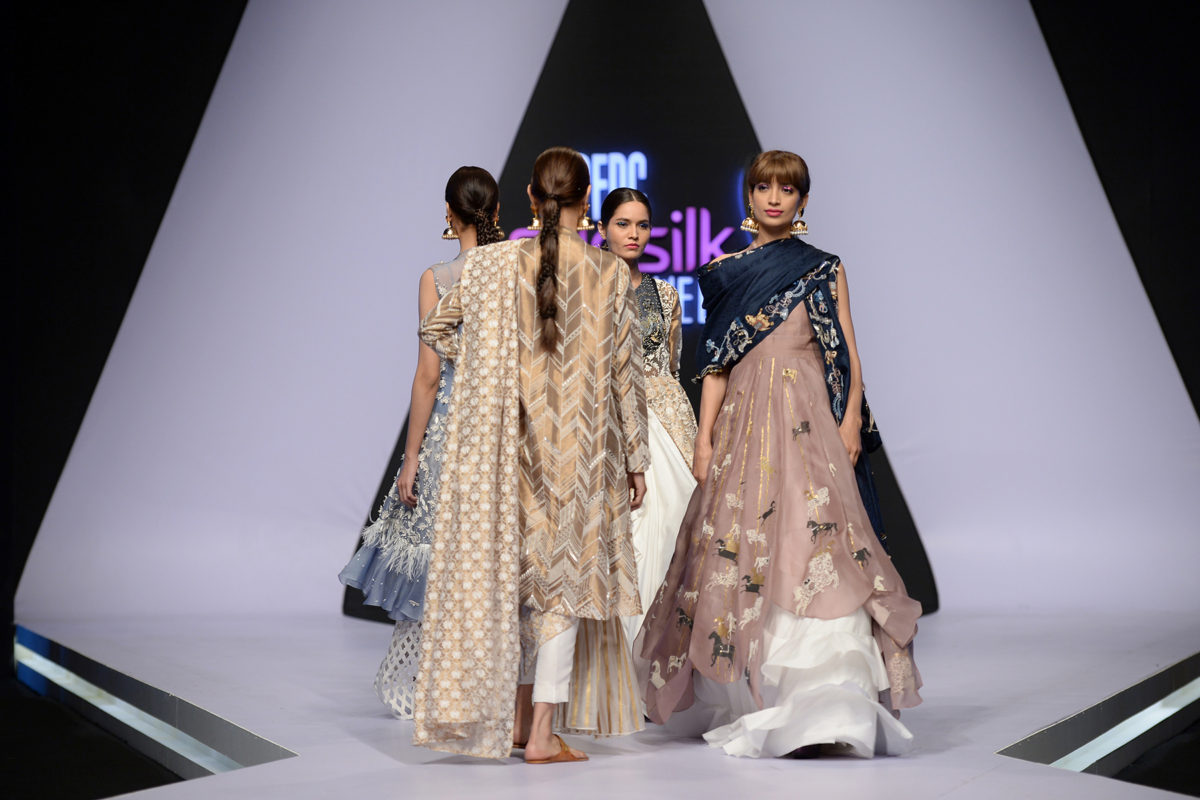 After the show ended, the breaks offered a great opportunity to mingle with other members of press and designers to bounce off what they thought of the clothes. It is amazing how candid people can be when you chat casually during chance encounters. Many complained that Nida Azwer’s collection teetered on being a tad bit too bridal and was probably no too “prêt”, but to me Pakistani fashion luxury is synonymous with decadence. You see actresses like Sajal and Hareem wearing bridal dresses to awards and openings now. It’s 2018, bridals are the new normal, sadly they are also the new “formal”!

The worst of the worst if I have to pick one, would be the oddball called Rici Melion, a brand that otherwise makes respectable suits for men, but chose to go all Jeremy Scott ridiculous for reasons unknown. Models walked out with soft-toys, grass patches and what not. Bearing no consideration to build context or narrative for whatever they sought to do. To quote Sara Mower, ‘fashion is only meaningful if you get gut reaction to it.’ My gut responded with nausea looking at male models doing cringe-worthy improv theatrics. 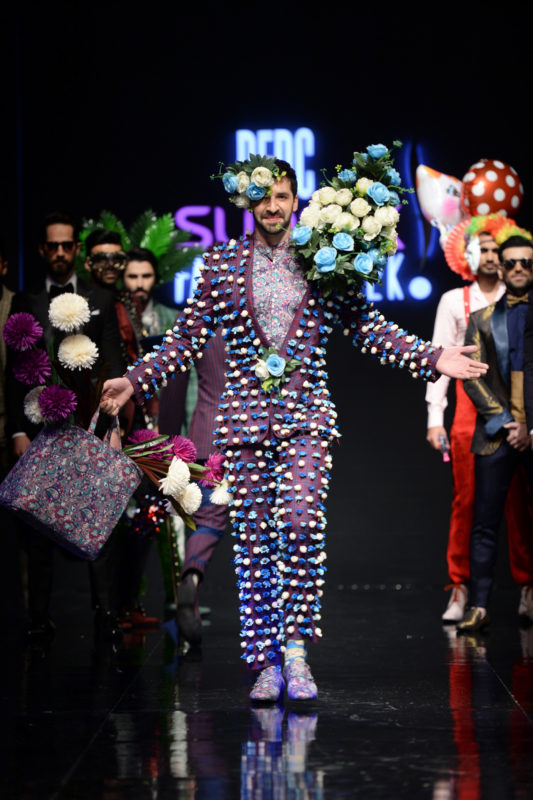 A few other designers also showcased during the 3-day long fashion extravaganza, but my personal barometer is if I can’t remember it after 6 hours or have trouble sorting out runway photos of one from the others, I deem it ‘reductive.’ Many might say that it is cruelly unforgiving but then if designers do not go for dramatic gestures or try to push the sartorial envelope through differentiated clothes, then frankly it is just lost in a haze, and is nothing more than a brick in the wall. They might and probably do still sell a lot but are not memorable. Gimmicks and excessive use of fringe trim don’t count!

So what are the key takeaways from PSFW 2018? You will see ‘trends’ in many high-street and mass retail brands showing you lots of feather and fringe trims, definitely more pretty floral prints and people wearing bridalwear in incongruous places and formal events. What you will not see (fingers crossed) is women wearing flimsy lawn as evening dresses or men sporting outlandish soft toys with suits. 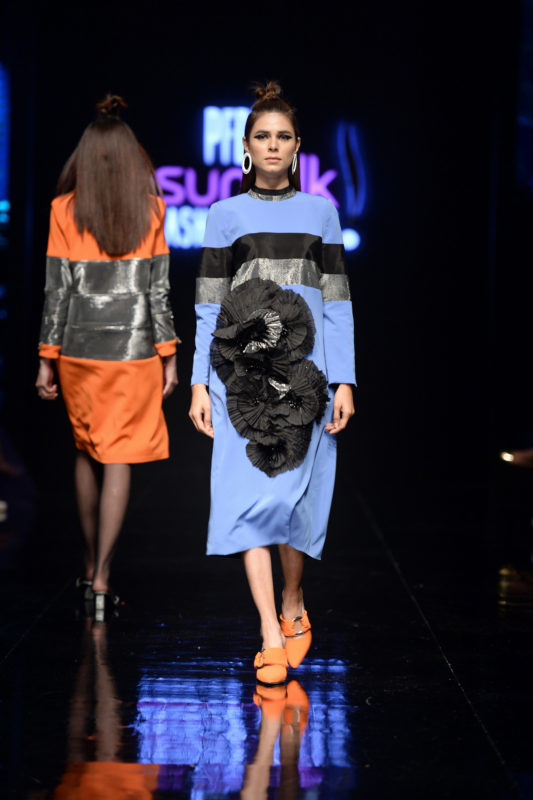 All in all, there’s this dire need in Pakistani fashion at the moment to strike a clearer balance between driving innovation and making clothing that is wearable for our fashion-forward woman, clothing that gives her both a sense of practicality and self-expression. Designs that allow us, the bloggers and the press, to be able to draw new attention to fashion, and to stir wonder.

PSFW 2018 proved that if you have expectations, some (young new designers like Hussain Rehar and Hira Ali in this case) do rise up to the occasion. What remains to be seen is if the corporate patronage by brands, be it Pel (or Bank Alfalah or whoever), is sustained. Historically, corporate sponsors have only piggy-backed on fashion and lifestyle platforms just to tactically gain a favourably soft and beautiful image. It’s hard to sell someone, that’s why kudos to PFDC for ensuring that the show goes on, year after year. 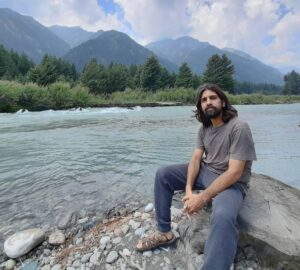 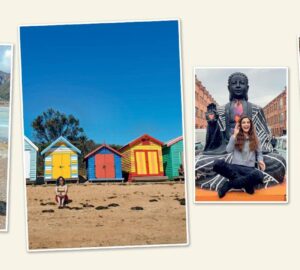 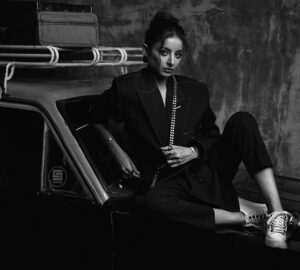