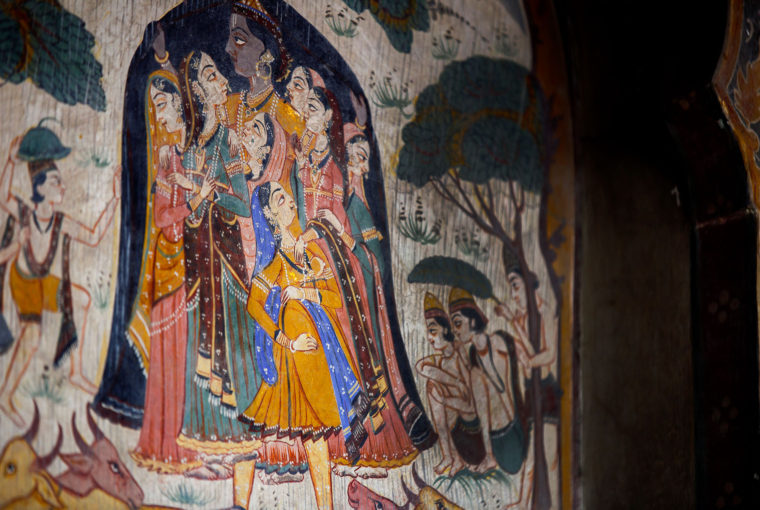 Haveli Nau Nihal Singh in Lahore’s Walled City is a feat of remarkable architecture but its bedecked walls hide a dark legacy, a tale weaved around the mighty empire of Maharaja Ranjit Singh and its eventual decline. 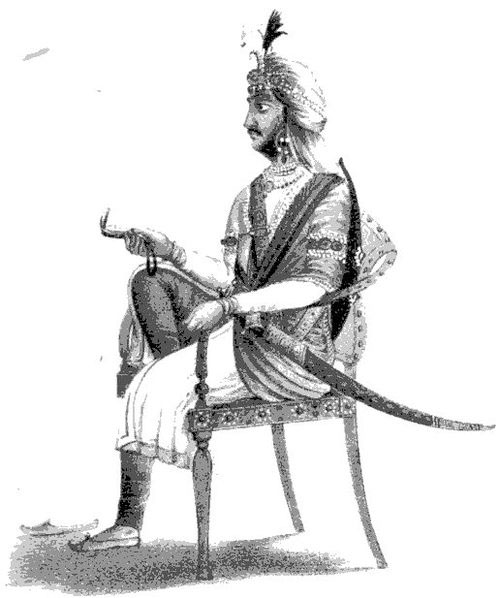 Entering Lahore’s fabled Walled City, it’s easy to lose one’s way inside the warren of narrow alleys that characterize much of androon shehr (inner city) these days. Don’t be put off by the grime and the gridlock however – once you know where to look, Lahore’s past as the seat of Muslim, Sikh and colonial rule will reveal itself to you in stunning glimpses of architectural and cultural marvels. 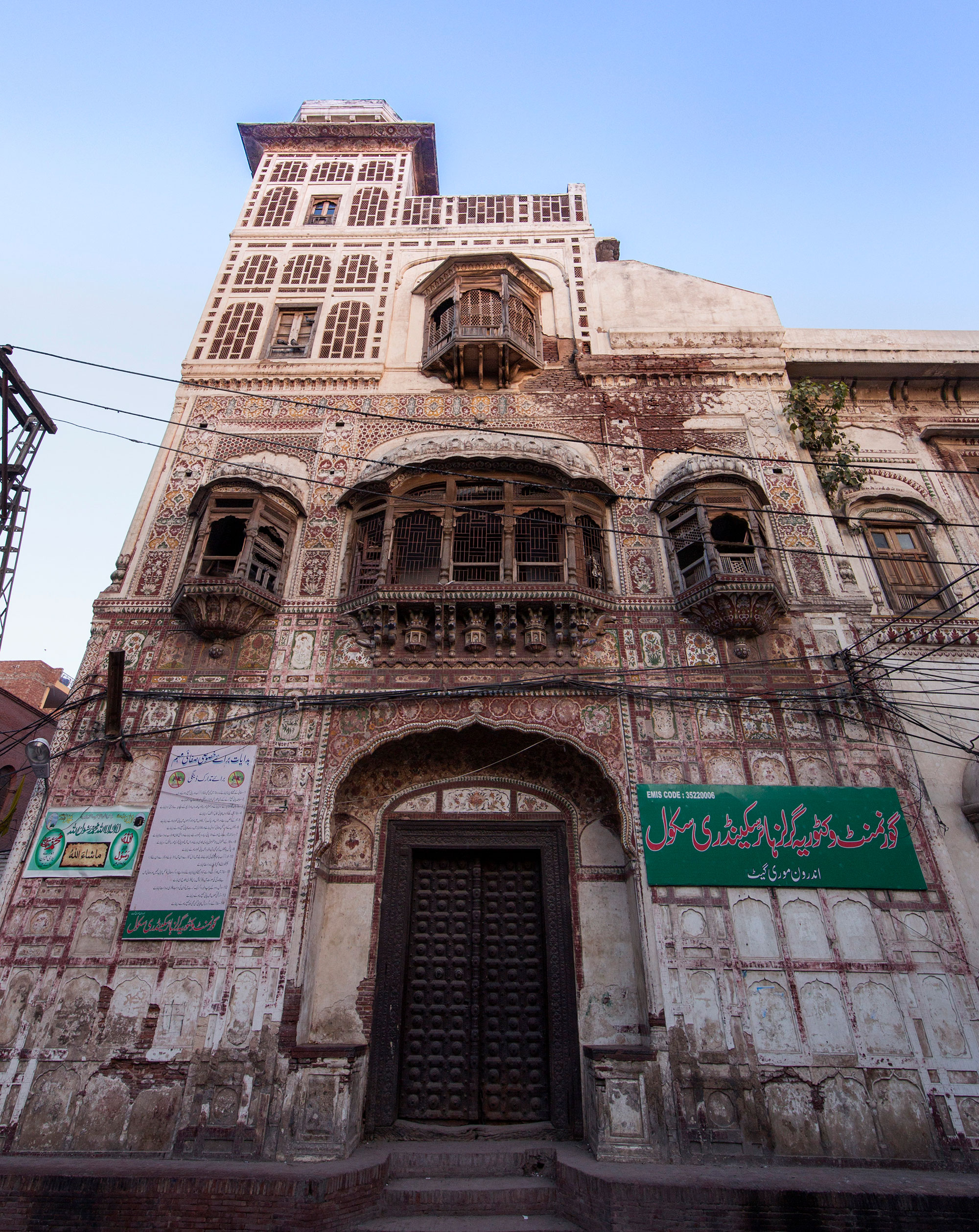 Perhaps none is as spectacular as the haveli of Nau Nihal Singh just inside Bhaati Gate. Ask for directions to Victoria School and you’ll soon find yourself standing within a huge open compound, colloquially known as ‘bhaiyyon wala maidaan’ (ground of brothers). Beyond the ground, which was once a flourishing garden, rises an imposing four-storey edifice. Currently serving as a government-run secondary school for girls, it was once the residence of the heir to the Sikh throne, Nau Nihal Singh, grandson of the legendary Ranjit Singh, and is one of the few surviving Sikh royal residences to be found in the region. 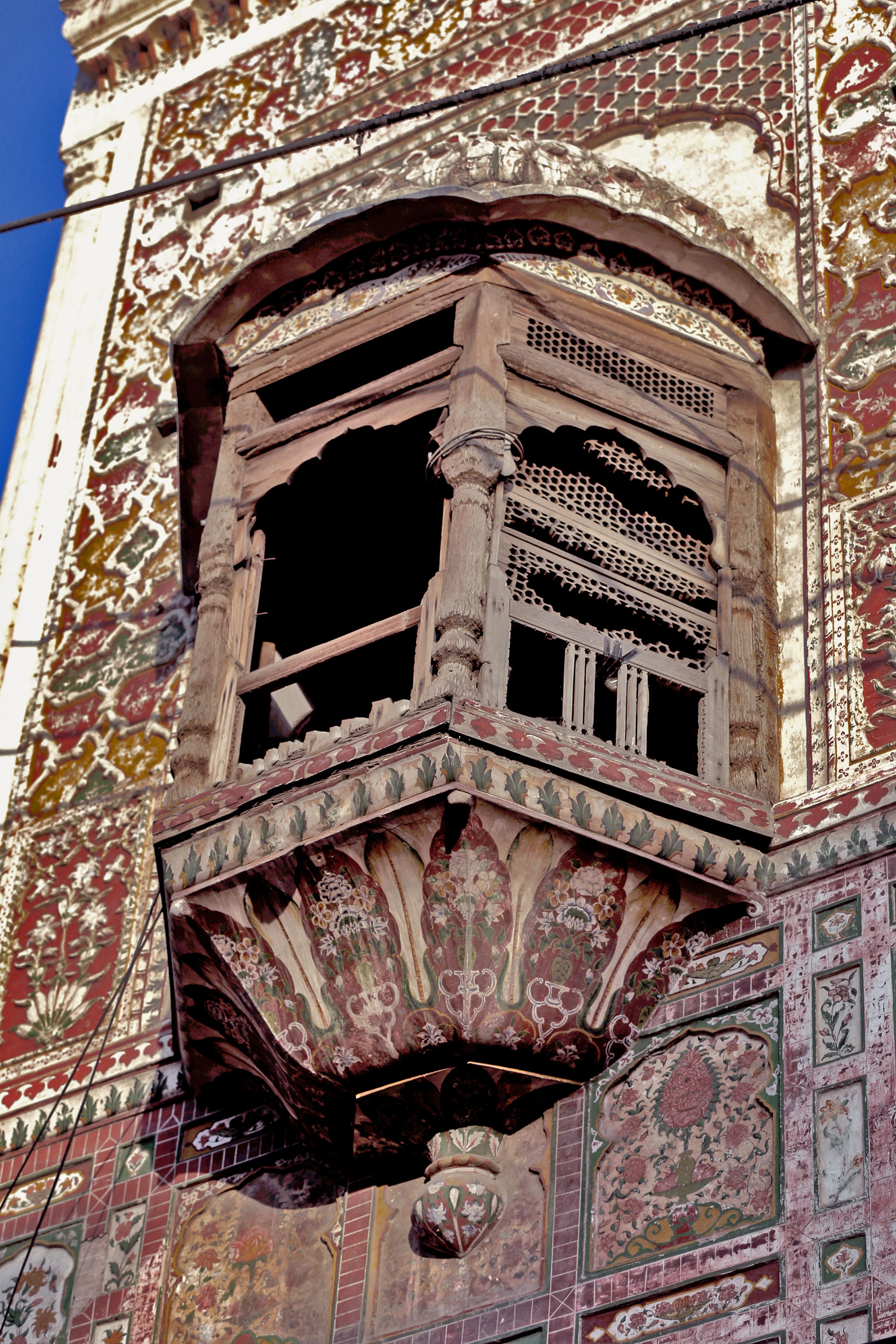 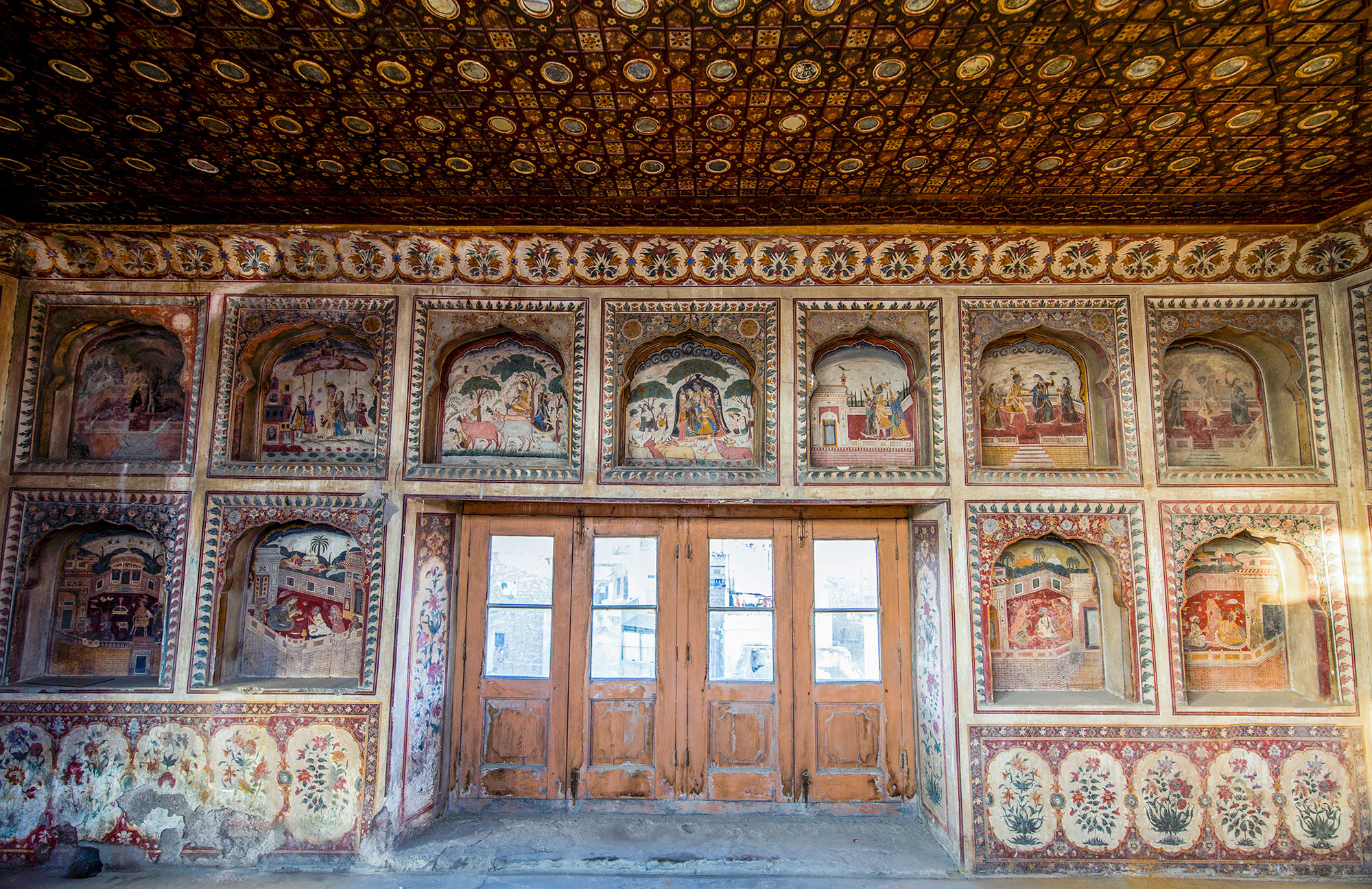 The various school notices and circulars tacked around the front entrance do little to mar the magnificence of the façade – the multi-hued frescoes, exquisite in their detail, the carved brickwork and the overhanging embellished wooden jharokas transport one to an era bygone, a time of princes and princesses, royal courts and palace intrigues. 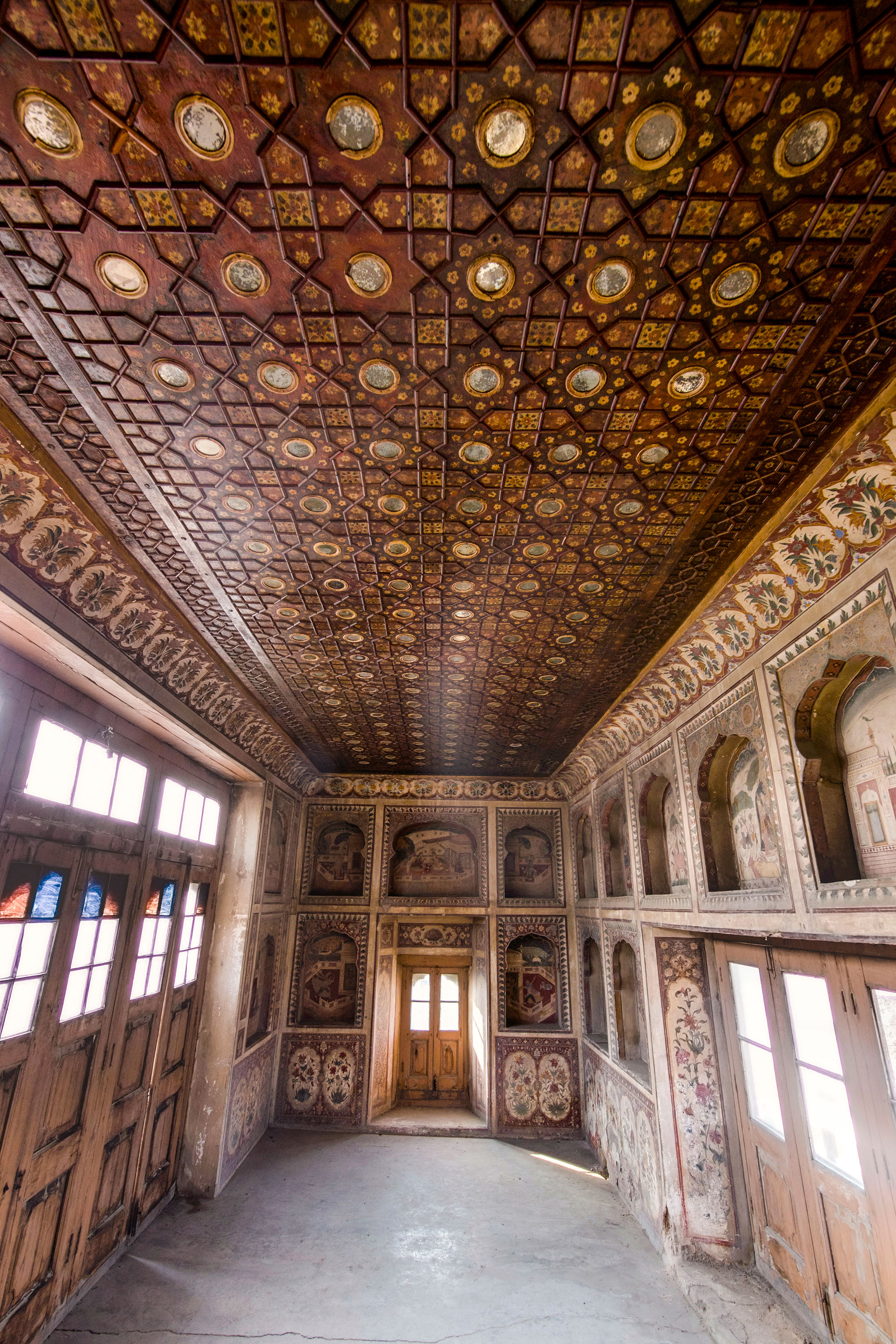 Maharaja Ranjit Singh, the founder of the Sikh Emire, was a patron of the arts and music, literature and art thrived under his patronage. European visitors to his court have written accounts of its pomp and splendor, which was in sharp contrast to the king’s own appearance, scarred by a childhood bout of smallpox. Prince Nau Nihal Singh, born in 1821 to the maharaja’s eldest son Kharrak Singh, was his grandfather’s favourite, the heir that he was grooming to take over the throne one day. 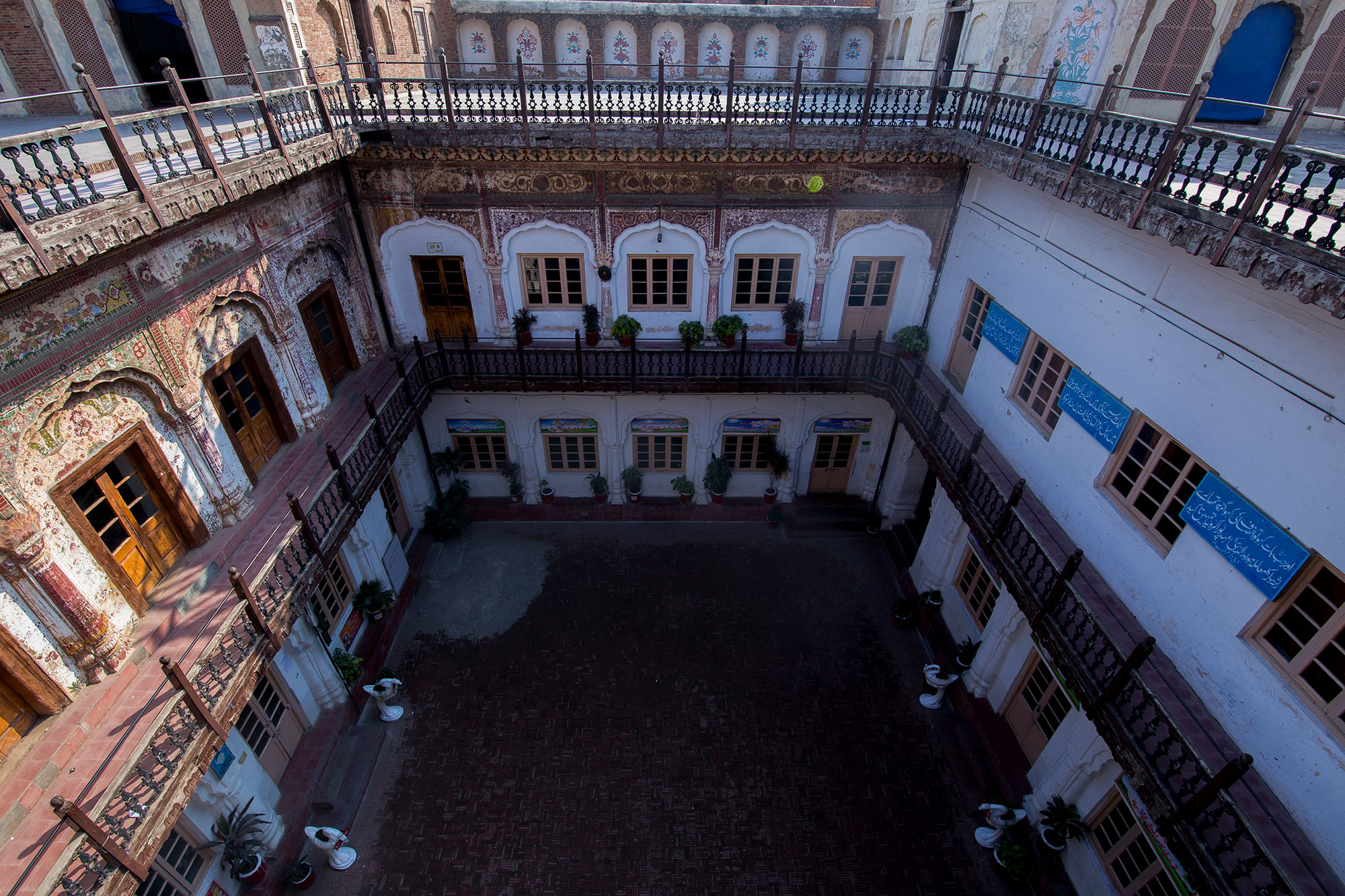 It appeared that Nau Nihal Singh had inherited not only his grandfather’s aptitude for statecraft and skill as a warrior but also his love for the arts. He began accompanying Ranjit Singh on military expeditions barely into his teens and was part of the Peshawar campaign of 1834, at the age of 13. His opulent mansion, with over forty rooms and a huge central courtyard, spoke not only of his favoured position amongst the long line of heirs but also his appetite for all things glamorous.

Writing in his 1892 book titled ‘Lahore’, S.M. Latif describes the haveli as such: “This lofty haveli is reckoned among the most beautiful buildings of the city of Lahore. It was built by Nau Nehal Singh, son of Maharaja Kharrak Singh, and used by him as his private residence. It contains numerous spacious chambers, halls and balconies. The ceilings are decorated with paintings and mirrors and are worked in gold. The walls are richly and tastefully ornamented with glasses and artificial flowers. It is now government property and is used as the zenana or female school.”

While much of the beautiful fresco work, depicting floral patterns and mythological figures, has faded with age on the lower floors, the Rang Mahal on the top floor has managed to preserve its detailed miniature paintings. The heavily ornamented room was meant to be a place of recreation to enjoy the cool breeze and a panoramic view of the city, while keeping the royal women hidden from prying eyes in the streets below. It’s easy to imagine the young prince, married at the age of 16 to Sahib Kaur, spending leisurely evenings with his beloved, cocooned inside the bedecked chamber, with its mirror-etched wooden ceilings and painted walls.

The grandeur of royal life could not, however, shelter the prince from tragedy. Nau Nihal Singh’s untimely demise at the age of 19 remains one of the most enduring mysteries of the city’s multi-layered past. Historians argue over the nature of the death – whether accident or murder – but agree over the events that led to it. There is little debate over the fact that following Ranjit Singh’s death, intrigue, conspiracies and betrayals within the royal court led to the empire’s eventual decline.

Nau Nihal Singh looked set to fulfill his grandfather’s wish of ruling Punjab when he took over the throne from his father Kharrak Singh who proved to be an ineffectual ruler. Soon after being relegated to the sidelines, Kharrak Singh was poisoned by the power-hungry court vizir Dhian Singh Dogra, the same man who is thought to have engineered Nau Nihal’s death. 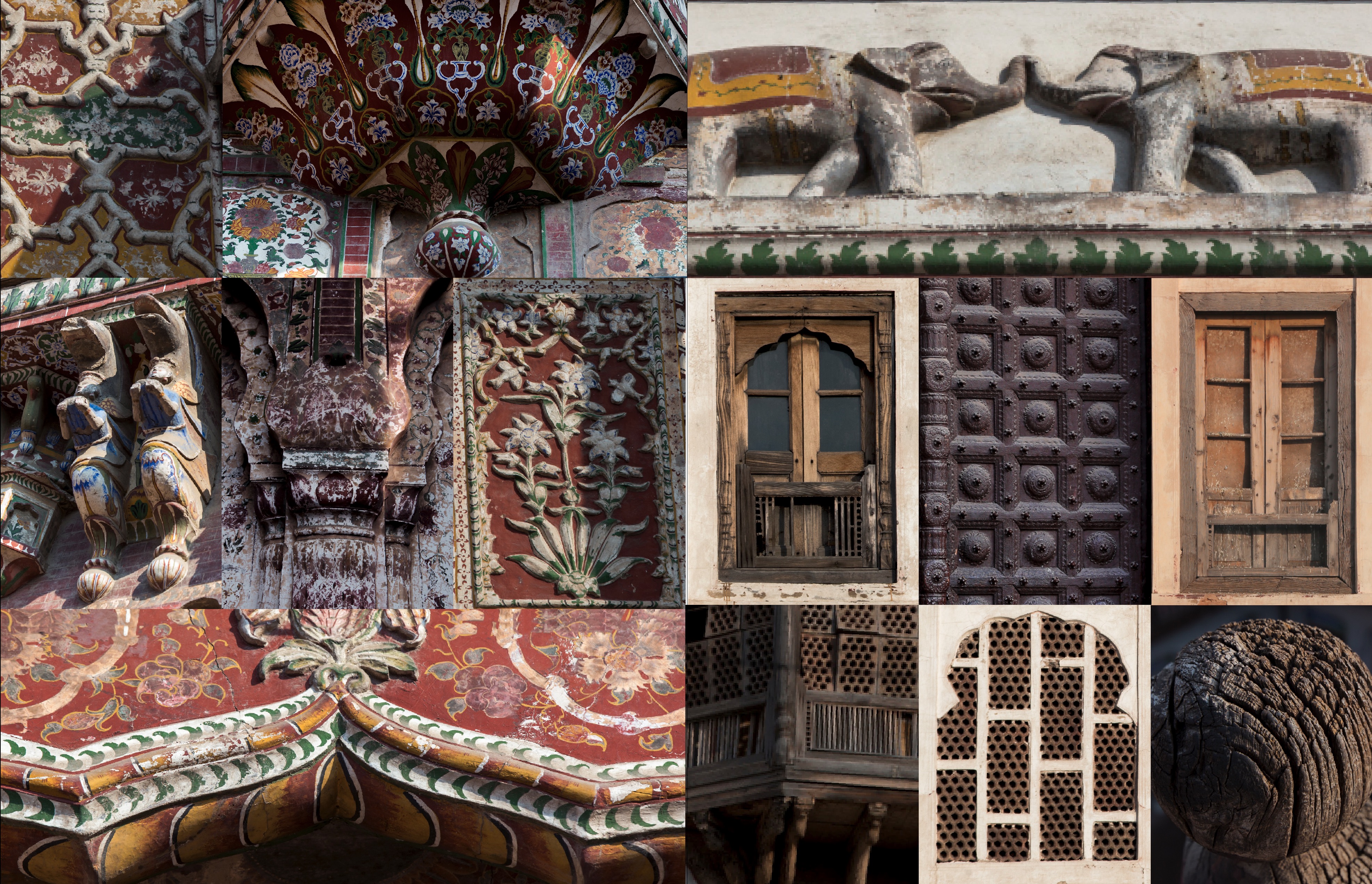 The circumstances that led to it were particularly tragic. Nau Nihal Singh had just set alight his father’s funeral pyre and was passing through Roshnai Gate near the Lahore Fort on his way home, when he was struck on the head by crumbling brickwork from the gate. According to eyewitnesses, the injuries only knocked him unconscious and he was hurriedly pulled into a tent within the fort. It was there that Dhian Singh Dogra administered the fatal blow that killed the prince, the very day that his father was laid to rest.

Dogra’s attempts to install his puppet on the throne, Kharak Singh’s step brother Sher Singh, were initially thwarted by Chand Kaur, Nau Nihal Singh’s mother, who took charge as the queen regent on behalf of her son’s unborn child. However, when Sahib Kaur delivered a stillborn child, the maharani was forced to relinquish power and retired to live in Nau Nihal Singh’s haveli.

Within a year, she met the same gruesome end as her husband and son and was found murdered inside her house. The stately mansion that inspires awe with its remarkable architecture hides a dark legacy, proving that historical fact can at times be more dramatic than the tallest tale.