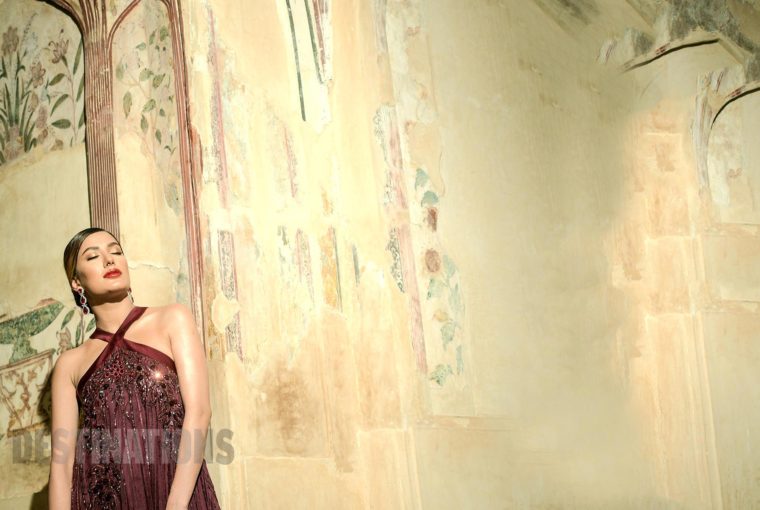 With her latest film Punjab Nahi Jaungi set to release in theatres nationwide on Eid ul Azha, Mehwish Hayat is gracing our cover this month. The star who is almost always talked about in relation to her work sits down for a candid conversation with DESTINATIONS. Here, she talks about her films, her passion for singing, her perhaps lesser-known but deep love for animals, and what it means to be a total bombshell.

Somewhere close to noon, Mehwish Hayat waltzes in to the makeup studio. It is a hot, sticky day with the monsoon season at its absolute peak. The crew is already growing slightly impatient expecting a star who will not be easy to deal with in humidity like this especially when the location is a historic, 17th century monument in the Walled City of Lahore with obviously, no air-conditioning.

She is dressed simply in a pair of black distressed jeans, a tank-top and a lightweight jacket that can only be explained in this weather as the hallmark of a film-star. She has pronounced cheekbones, a beautiful dusky complexion, but her most striking features are her catlike eyes. She has an air of natural steadiness and grace but it is the way she moves – nimbly – that she reminds me of a cheetah.

The quiet dignity that surrounds her aura is reassuring. We introduce ourselves. She’s not warm or particularly friendly but in turn, polite and professional. It almost seems like she is wary of interviews or perhaps, worse case, bored of them. I wait for her to get ready before we can sit in the car and have a conversation en route to the site.

As we weave our way through late afternoon traffic, I begin the conversation on a personal note, trying to set a non-judgmental tone for the rest of our talk. I tell her I heard she has two birds and two dogs. “Three Chihuahuas and two birds…” she corrects me, “out of which, one bird has been set free and I am waiting for the other to grow its wings back before I can let that one go too. Both were rescue birds so I wouldn’t call them pets. They belong to the open skies.” Respect. “At some point in my life, I would like to set up an animal shelter.” More respect.

There isn’t much on the gossip circuit about her being an animal lover and wanting to help strays. In fact, I tell her, apart from her official Instagram account, there isn’t much on the internet about her as a person, at all. “I like to keep my private life very private. Enigma and mystery are part and parcel of being a star. Well, at least at one point it was. In the olden days, catching a single glimpse of your favourite star was a lifetime experience. People would talk about it for days on end, share the story with their friends. I belong to the old school of thought. Feeding this internet-appetite and growing fan frenzy by taking pictures and selfies everywhere I go is not my style. My PR and publicist tell me I have to do it so I try.ani It puts a lot of unnecessary pressure on me. I am one of those who say if there are fireworks in the sky, I won’t instantly take out my phone to make a video of it… instead, I would just let everything go and live in that moment. That is who I am.”

Her adaptability is inspiring. She comes across as someone who wants to do the right thing and stick by it. Whether it means taking a photo and sharing it on social media, because it is required or helping animals in distress despite hectic schedules. With this positive determination, it is little wonder Mehwish has blazed past every marker of performing arts to stardom in little time, and there’s little sign of slowing down. She is a critically acclaimed theatre and TV actor, a film star and a music artist. With each medium varying and overlapping in turns, what does she enjoy doing most, I wonder out loud? Her response is self-contained and she picks her words carefully. She will answer any question but it is as if she is resisting dialogue. “Honestly I cannot pick and choose any one. Every medium has its own magic. I love each one because all are inadvertently linked to art.”

But it is films that presented Mehwish the stairway to stardom heaven. She was primarily noted for her provocative song-dance performance in one of the genuinely rare hits from Pakistan’s new age cinema, Na Maloom Afraad, post which she has often been labelled as a siren. I seemed to have struck gold. Mehwish finally opens up and riffs away! “I like it when people find me hot. In fact, it is an amazing feeling to be acknowledged for your good looks, but what bugs me is when some people tend to objectify and cannot look beyond that to recognize my actual talent. I put in a lot of hard work into my acting too. And I think skill also makes a person beautiful.”

So which of her projects to date has she enjoyed doing most, I ask? Ironically, she comes back to the same character that stamped the bombshell label on. “Na Maloom Afraad was my first movie! Although it was a special appearance, that was what got me blessed with all the attention. People still message me about that song, which is amazing since it has been three years now and people still remember it. In this day and age, for something like that to happen is incredible given how people have such short-term memories and they are overexposed to all sorts of screens and media. Also, nothing compares to the experience of seeing myself for the first time on the big screen. There can never be a first time again so that was very special.”

“Jawani Phir Nahi Aani was an ensemble cast and we were shooting in a foreign location. We had to travel together and learnt how to become one family unit. That was a learning curve. Then, for Actor-in-Law, I played the role of a Parsi girl for which I had to be mindful of my accent and performance. So again, it is difficult to choose one experience over another.”

With a portfolio as diverse as hers, this bright star seems to have played her cards well. “Pakistan’s film industry is at a very initial stage of revival. Filmmakers are not keen on experimental risks. So naturally one has to be smart about it and choose characters wisely. If I am playing the same kind of role in every film, people will get bored.”

Although by now it is certain that Mehwish is someone who knows how to assert herself, landing a Coke Studio gig is not easy on a show that almost single-handedly has set the bar for credibility and authenticity of musical talent in Pakistan for a decade now. I ask her how that happened, and her eyes lit up as she narrated this tale. “It is a very interesting story. There was this film being made and the director asked me to be a part of that film. I told him I wasn’t sure about doing that film and he told me that he would still like me to sing the songs for it. I was initially sceptical but then the director told me that music producer and artist, Shiraz Uppal, who was working on this project, was in town and he would like us to meet. I went ahead. We practiced a bit. Shiraz made me sing some high-pitched songs, then some in low pitch. Towards the end, he asked me if I would like to sing on Coke Studio. I was over the moon. ‘Why not!’ I said. And that is how it happened.”

So is music her calling? “Well, if I wasn’t an actor, I’d be a music artist. Which is funny, because in a way I still am,” she is proud to declare. It seems there are not enough frontiers for this mighty power to conquer. “Well, to be honest, there is a long way to go. That animal shelter has to come up and yes, I too, dream of Hollywood!” she smiles. The car ominously comes to a halt as we reach our final destination, the Shahi Hammam. She puts on her pure black, matte finish Rayban wayfarers and a pout as she steps out. Her instinctive film star charisma is back on and she makes many a head turn.

The 7 Ages of Pakistan