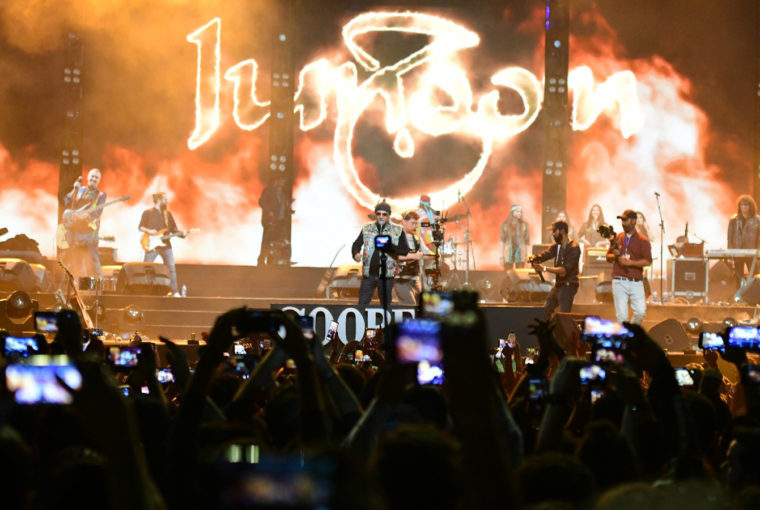 Karachi was THE place to be if you love good music, especially Sufi Rock-a genre indigenous to Pakistan-particularly to one band-Junoon! If you haven’t been living under a rock for the last couple of months then you probably know that one of South Asia’s largest Bands, Junoon, reunited after last performing in 2005! Their performance after 13 years was the reason people from all around the globe flocked to Karachi to witness an epic performance by this band! The excitement level in Karachi was UNBELIEVABLE! We literally counted down the time till 5 pm on 25th December and the city was buzzing with anxious fans waiting to be catapulted back into the good old days of the past when Junoon was everything!

Fandom that is literally next-level!

Junoon is one of our all-time favorite bands in Pakistan but for some people, it is much more than that! For them, it resonated with their spiritual self via music which is why fans flocked from all corners of the country to K-Town! 4 such friends decided to embark on a journey from Rawalpindi to Karachi so they could attend the concert of the decade, Junoon’s reunion concert which had been dubbed the event of the decade (read: possibly millennium) in the city of lights where faint winter had us and in the mood for some great music! This concert was definitely a star-studded event that had many of our favorites in attendance including Zohaib Hassan who flew in from Dubai, Wasim Akram and many more!

The 4 friends had set off on a voyage to remember with nothing but a guitar, a pair of cameras and an old trip down memory lane with Junoon’s hit songs playing on repeat! After making a stop in Multan, they headed down to K-town to enjoy some good food thanks to Karachi’s vibrant food scene, bundled up in warm cozy jackets and, most importantly, met their beloved band and celebrated their return on the stage after more than a decade! You can follow these 4 enthusiastic Junoonis on Instagram at @0owali, @uswarin, @shamsulain.ad and @lalahsan to see their fantastic road trip and their experience of this unbelievably emotional ride that will be remembered for years to come.

That’s not all! The love for Junoon was REAL!

With their lyrics and timeless rock music, they have garnered much appreciation not only at home but across the globe. Junoon’s fan base is extensive! A Junooni-for-life, Fahad, had flown Karachi all the way from Australia when he heard about this reunion concert! He was exhilarated and couldn’t wait to see his music icons rockin’ together once more! If this wasn’t true fandom then we don’t know what is! His night must have been memorable because the grand show came to an end with fireworks arranged by Peek Freans and that was definitely the icing on top!

The more than perfect venue of the concert, Moin Khan Academy, was where everyone had the time of their lives and you definitely should not have missed this once-in-a-lifetime event! The gigantic stage and the vast grounds made this the ideal location and this grand setting was all arranged by Peek Freans! The grandeur of this event was certainly unparalleled by any other concert we’ve had in the city so far!  Junoon Concert surely had the audience captivated! This long musical journey commemorated to the golden decades of our childhood band, Junoon, and the idyllic location made this concert one to remember! The LED graphics and the animations across the larger-than-life screen had us, along with thousands of other Junoonis, hooked throughout the evening!

A Sooper December with Junoon!