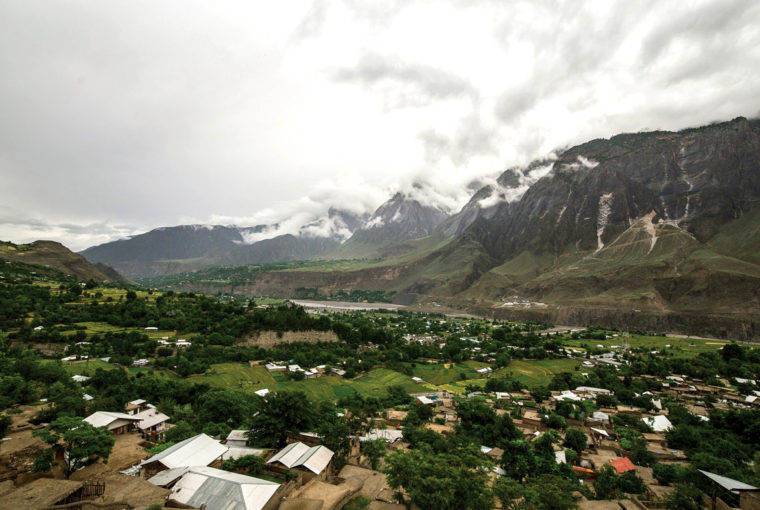 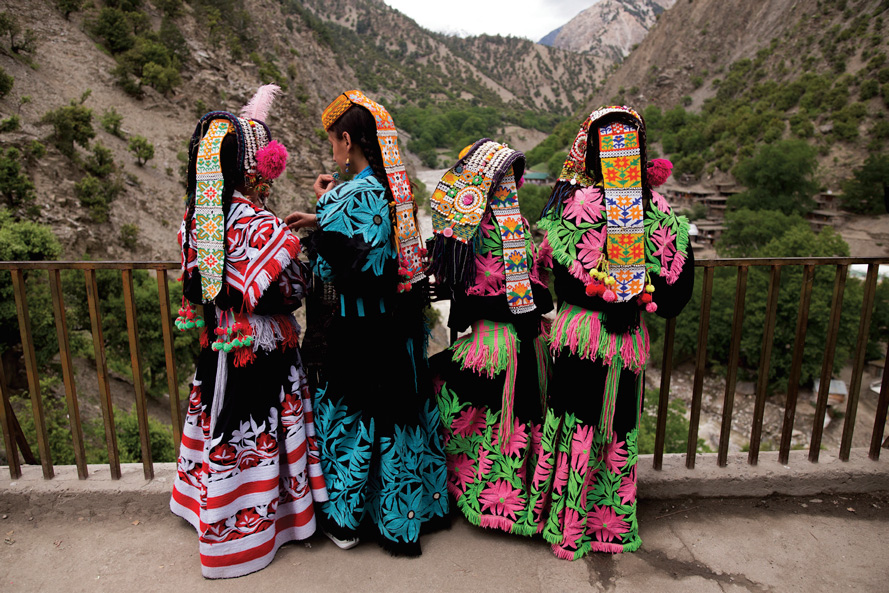 There are few places as stunningly beautifully as the Chitral valley. Nestled at the foot of the mighty Tirich Mir mountain, the highest peak of the Hindu Kush mountain range, it offers scenic vistas, great cuisine and unmatchable hospitality. I had been planning a trip for the better part of five years before I finally got my act together and visited the valley in April of this year. The trip did not disappoint.

Our itinerary was set over 8 days which included excursions, treks, camping and visits to nearby areas. The group was a hotchpotch of Lahoris, Karachiwallas, Islooites and our host Mehnaz ul Mulk, a native of Chitral, and her husband Gahtan Vahidy, a childhood chum. We stayed at the Hindkush Heights, a hotel which was built and is now run to perfection by Mehnaz’s parents, Siraj and Ghazala ul Mulk. Overlooking the Chitral airport, it offers beautiful views of airplanes landing and taking off. Each and every room has a private terrace as well. There is a central dining hall where the most sumptuous meals are served, made mostly with locally grown produce such as asparagus and mushrooms. Mehnaz and her parent’s hospitality and efforts to make the trip a memorable one cannot be understated. Travellers should be aware of one point, however – if they invite you for a “walk”, you should mentally prepare yourself to be at the point of collapse within a very short timeframe! 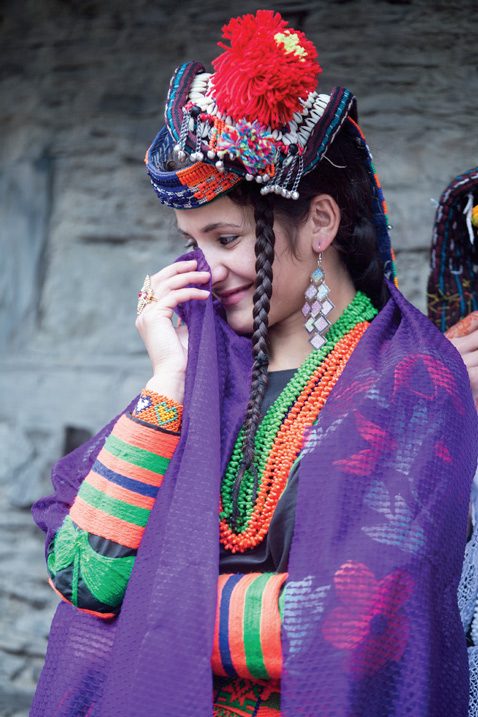 Having arrived at the hotel, we spent a night there and decided to visit Bumburet Valley which is home to the Kalash tribe. Their culture is different and interesting and frankly, it is quite amazing to have survived given that their population has been on the decline for several years. Our trip was a short one as we decided to trek back taking the “scenic route” which provided a rather perilous “living on the edge” sort of experience for the uninitiated. Mehnaz, of course, had no problem and at one point started running the narrow trail! Difficulty aside, the trek was one of the highlights of the trip. The views of the various peaks and valleys were phenomenally beautiful. We descended the trail at dusk and drove back to the hotel.

The next day we left for Mastuj, one of the ancestral homes of the Ul Mulk family. Mastuj is a truly special part of the world. The Hindukush Heights Hotel has built a series of chalets that overlook an orchard of apple trees and are surrounded by snow-capped peaks. We spent two nights here and the temperatures were markedly lower. In the evenings, we enjoyed a bonfire and during the day, soaked up the rays of the sun, which are remarkably strong at that altitude. One of the most memorable stretches in these two days was a trip to a local village, improbably named Onshot. Onshot is the village of one of the staff members at HKH and he invited us for lunch to his home where we were treated to fresh trout, a bhujia of asparagus and mushrooms and delicious pulao. Sitting in these beautiful surroundings, in the rather Englishsounding village of Onshot, I mentally transported myself to the English countryside, until of course someone answered their phone and started shouting in Punjabi! 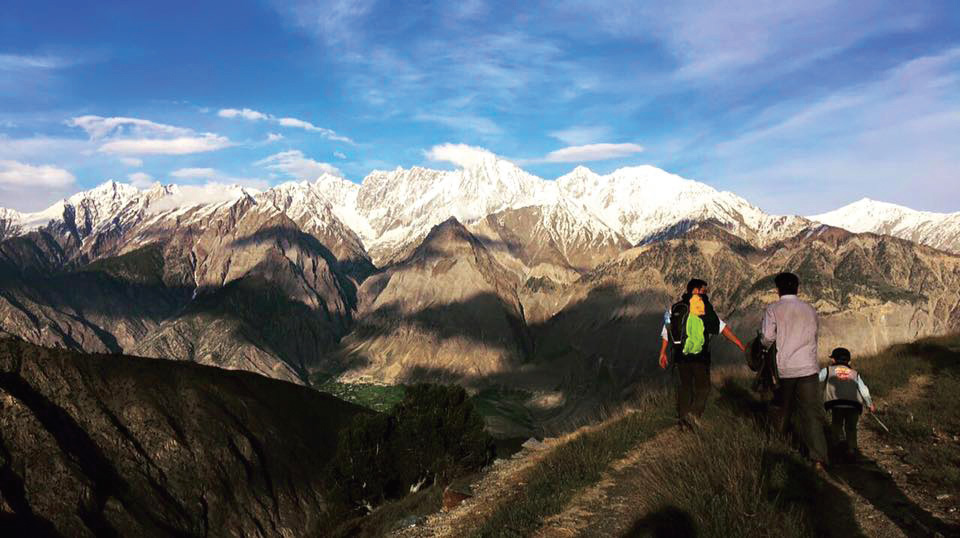 The following day we returned to HKH for a night before setting off on a camping and trekking trip to the village of Charun Oveer. After pitching camp, we went for a short walk before settling in around a campfire. Having experienced the demanding nature of the previous trek, I tried to get a good night’s sleep – made impossible by the snores of our camp site that resonated across what seemed like the entire valley. Nonetheless, we began our trek on schedule at 8am. We quickly divided into two groups. I happened to be in the group led by Mehnaz but our guides got left with the other group. Before long, a local ‘baba’ attached himself to us and let’s just say, it was all downhill, or rather, uphill, from there. We ascended what seemed like an almost vertical peak to land on top of a trail that led to a glacier. While we were cursing the baba the whole way, the end result was spectacular. In conclusion, a trip to Chitral must surely be on the bucket list for all adventure travellers. In the immortal words of Dr. Seuss

“You’re off to Great Places! Today is your day! Your mountain is waiting, So… get on your way!”

How to Travel with your Tribe: Bali 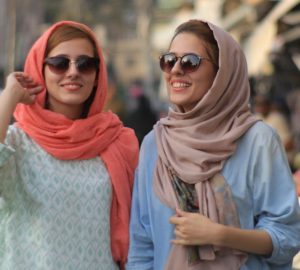 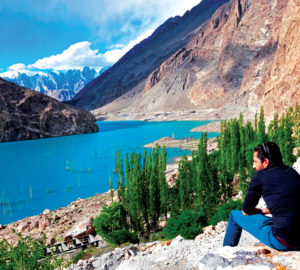 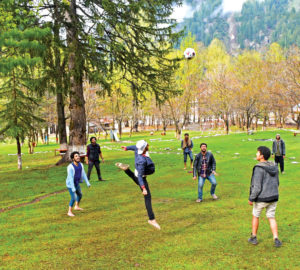